A couple and their three-year-old daughter were held hostage in their car for nearly five hours for feeding stray dogs. The incident took place on Monday evening, in Vatika G21 Apartments in Sector 83, Gurgaon.

This happened after a clash between the Residents’ Welfare Association (RWA) and the family. RWA said that they had asked the family not to feed the strays, but despite repeated requests, they did not pay heed. “Stray dogs are attacking residents. Even a day before (the incident), one of the residents was bitten,” an RWA member said.

The woman from the family of three said that they were stopped by a mob of residents and prevented from getting to their residence. “They started getting violent and abusive, and women attacked us with an intention to cause physical harm and to kill my husband and daughter. When we tried to escape, they deflated our car tyres. Some of them tried to snatch my daughter also. All the men and women held us hostage and in captivity in our car while they continued to push our car, bang on the windows and doors, attempting to break in and kill us,” the woman, the complainant in the case, said. 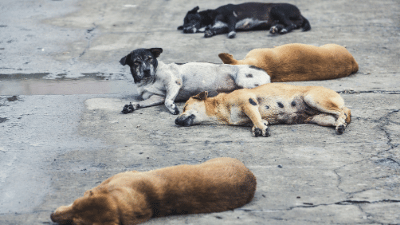 Municipal Corporation of Gurugram (MCG) joint commissioner Hariom Attri said that residents or RWAs can call their helpline, 18001801817, for assistance on matters pertaining to strays. “If a stray dog is suspected to be ill or found attacking residents in an area, people can reach out to us at our helpline number. Subsequently, officials from our concessionaire would be sent to the spot to attend to the animal. They will sterilise and vaccinate it and keep it at their treatment centres for examination and release them back in their natural habitat after two days,” said Attri.

“All animal birth control matters come under the purview of the SC. The orders clearly state that no matter how much the situation of stray dog-related issues gets out of control, only a scientific approach can be used for dealing with the matter. No authority can use innovative or subterfuge methods to deal with the matter,” said Chetna Devendra Joshi, Animal Welfare Board of India representative for Gurugram and member, People for Animals (PFA).

Attri said, “we have come to an agreement with two NGOs for vaccinating and sterilising stray dogs. They treat dogs at their respective centres in Basai and Farrukhnagar, and receive around ₹600 per dog from the MCG.” Attri also said that the MCG is planning to set up Haryana’s first dog birth control centre at Begumpur Khatola, which will have an operation theatre, vaccination area, separate dog sheds and a ground for dogs to play. He said that an estimate for the project is being prepared at present.