Snowy, a now 10 year old Indie, left his previous parents when he was just a puppy and landed at the door of this Lonavala family and found his forever home.

Ten years ago, Prachee’s father was diagnosed with terminal cancer and the family was going through a tough time financially, emotionally and mentally. Then on one fine winter morning, this beautiful furry boy appeared out of nowhere and brought so much happiness into their lives. Originally, Snowy belonged to another owner who identified and took him back after a few days. This left them heart-broken but they believed he had to be with his original parents.

To their sweet surprise, the next morning, Snowy found his way back to their home and the owner never returned to look for him again.

Reminiscing about the incident, Prachee shares, “He was already a year old and a big boy when he chose us to be his family.  When dad's deteriorating health created so much tension and stress, this boy made sure we continue to be at peace, in his own way. I vividly remember, after we lost papa he would come and comfort us by giving his cute little 'paw' every time someone would break into tears.”

For ten years, Snowy has remained the only 'male member' for this family, as he was only surrounded by four ladies - a mother and her 3 daughters and has been a tremendous support after they lost their father to cancer. He has even saved the family from being robbed and from snakes that entered their home! 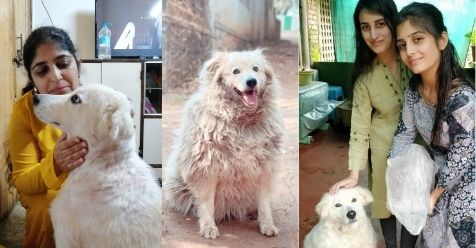 Prachee, her sisters (Gaurvee & Nidhi) and her mother (Namita) believe in angels as according to them, God sent them one exactly when they needed him in the form of Snowy.

“He is mom's favourite and she pampers him the most. Snowy has completed our family in many ways and am thankful to God for sending this little angel into or lives", Nidhi, the youngest sister, adds further.

Animals are said to be telepathic. Since Snowy was the one to choose this family - in a way, the family didn't adopt the dog, the dog adopted them!

Talking about Snowy, Gaurvee, another sister, chuckles & says, “He thinks he is 'hooman' and loves having a proper routine & if you dare disturb it  there are consequences to be faced. He does many tricks but our favourite is when he opens the door with his cute paw. He hates it when we are on our phones and hits it with a paw every time demanding attention. Family game nights are his guilty pleasure and he loves sitting right next to us and barks every time in excitement when there is commotion in the room. In a way, it makes us believe Snowy may be a reincarnation of Papa’s soul.”